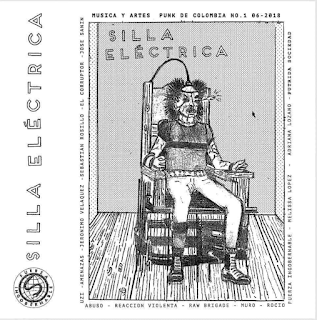 [UPDATE 01/24/2019: You can download the full compilation with artwork, inserts and layouts included by clicking here].

Coucou, les chaton.ne.s! We're back with a new entry. I'm still working on the content mentioned in the previous entry and don't have a date for publishing it. But I'll try to do it during this week. So in the meantime, I present to you this impressive colombian hardcore punk compilation whose physical edition will be released in september. Also, this compilation was recorded with a 4-track MT4X tape recorder with some brand new tracks (even some of them exclusive for this release, for example, Roxio and Muro tracks) and some others will be soon released on each band's upcoming records. Finally, this record was compiled by Fuerza Ingobernable, the most recent project of our colombian friends of Rat Trap collective that also released last year, along with Byllepest Distro (Norway), V/A Fuerza Ingobernable I - Punk Colombia 2017 (You can refresh your memory by clicking here).

Now, from now on, a data sheet with some additional  information of the release will be present. This feature could also be applied to other kind of releases.  Also, for this record, I'll review each band individually since most of them are new (meaning this is their long-awaited debut) and there are some curious facts to remark. And, yes, there are some bands I've completely forgotten to write about as well ha ha. This is something I've been thinking about lately and could also be applied to other future reviews, except, for example, if there's a compilation with more than 15 bands ha ha. We'll see how will work.

Finally, don't forget to click on the image above, you'll be redirected to Fuerza Ingobernable's YouTube channel where you can listen to this record. When I get my physical copy, I'll immediately upload it. Also note that this compilation is just a humble register of what's going on within the colombian hardcore punk scene in 2018 so far. Indeed, there are lots of bands missing (including mines ha ha ha) that will eventually be featured here in the blog. The New Wave Of Colombian Hardcore (NWOCOHC) is each day a reality, huh? With all that written, let's begin. 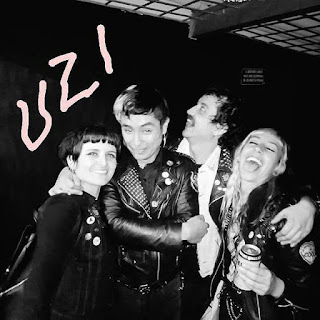 UZI is a female-fronted hardcore punk band featuring members of other hardcore punk and post-punk from Bogotá such as Final, Muro and Tumbas (already featured here in the blog). They also share their drummer with Abuso (another new band featured in the compilation). The band was formed early this year, have played some shows and recorded 4 tracks for this compilation, just before the start of Muro's second european tour in june. Regarding the sound, UZI has influences of both UK82 and early latin american hardcore punk with some eventual punk ibérico and post-punk feel in some guitar and bass chords. Both musical execution and instrumentation is pretty neat with short and fast-paced songs with angst-filled vocals dealing with some existential issues. They reminded me of US-based female-fronted latino/chicano hardcore punk acts such as Futura, Exótica and Tozcos, for naming a few. Finally, I expect more news coming from this band in the near future. Highly recommended. Enjoy! 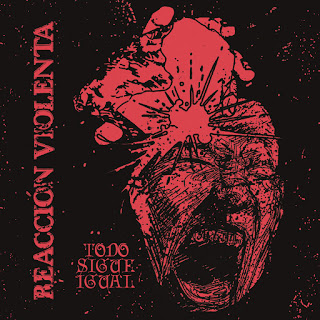 Reacción Violenta is a new hardcore punk band from Bogotá that has released so far one EP named Todo Sigue Igual. In fact, 4 of 6 tracks of that record are featured in this compilation with no apparent musical differences. Regarding the sound, Reacción Violenta plays short, fast and loud hardcore punk with both UK82 and d-beat influences but with the rabid and visceral latin american feel. And, yes, as you may expect, the music is short, fast and loud with some complex guitar chords and riffs. If you remember well local bands such as Primer Regimen (also featured here in the blog), this band will please you. Finally, click on the image for getting redirected to their official bandcamp account where you can listen to their first EP. Highly recommended. Enjoy! 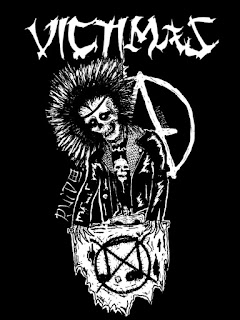 Víctimas is an impressive outfit featuring members of different cities of the department of Antioquia (including Medellín). They have released so far one demo and are currently preparing a 3-way split with Dissocial (Medellín) and Bömbärdeo (Chile) and another split with Amenazas (Bogotá).  For this compilation there are some songs taken from the demo, as well as some others that will be featured in the aforementioned splits. Regarding the sound, Víctimas is your ideal d-beat tribute band with notorious influences mostly taken from the swedish and japanese scenes with short, fast and loud songs and lyrics dealing with issues like the apocalyptic nature of humanity after and before the imminent nuclear holocaust that will kill us all. Indeed, all-time classics such as Totalitär, Crude SS, Discard (Sweden), Frigora and Argue Damnation (Japan) will surely come to mind.  Finally, click on the image for getting redirected to their official bandcamp account where you can listen to this band. For fans of latin american disclones such as D.H.K. (Perú), B.E.T.O.E (Venezuelans exiled in Barcelona) and Bömbärdeo (Chile). Highly recommended. Enjoy! 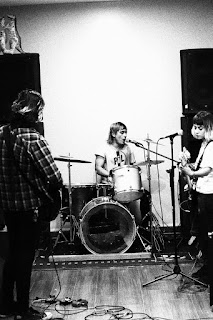 Abuso is a recently formed hardcore punk band from Bogotá featuring ex-members of Deshuesadero (México) and Los Maricas (Bogotá) and current members of emerging local hardcore bands such as Yo Soy La Destrucción and UZI. They contributed 3 tracks to this compilation and are their first official recordings as a band. Regarding the sound, Abuso plays hardcore punk drawing influences from UK82, d-beat and early latin american hardcore punk (notably colombian and mexican). Just like UZI, some songs have bridges with a more traditional punk and post-punk feel but without losing the grip. I really like both their musical execution and instrumentation. And, last but not least, their lyrics, as the band describes, deal with "the quotidian abuses sieving above our humanity". Best description ever. Finally, click on the image for getting redirected to their official bandcamp account where you can listen to their contributed tracks individually. I also expect more news coming from this band in the near future. Highly recommended. Enjoy! 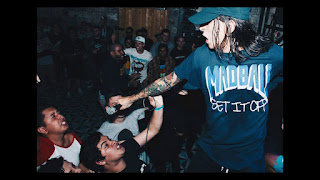 Raw Brigade kick asses once again with their superb hardcore punk reminiscent to the old glories of the late 80s and early 90s NYHC scene. We have exceedingly featured them here in the blog (In fact, they have been featured in our colombian best picks of both 2016 and 2017. Cool, huh?) so, it isn't necessary to write more about them in this entry. They recently came back from their successful tour in the US (including their live performance at This Is Hardcore Fest) and kudos for that. So, for this compilation, they re-recorded 2 songs from their Kicking Your Face EP, 1 song from their demo '16 and 1 song from split with partners in crime Revival. The featured songs have a slight musical difference compared to their original releases with a more "raw" approach but without leaving aside their superb savoir faire. Absolutely nuts. Finally, click on the image for getting redirected to their official bandcamp account where you can listen to their already released material (also available here in the blog). As always, I expect more releases from this band in the near future. Highly recommended. Enjoy! 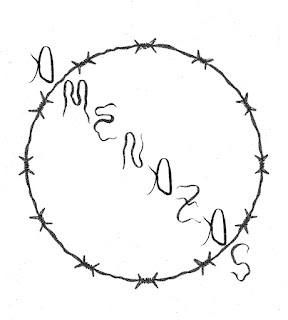 Another band "from the house" makes their appearance contributing two superb brand new that follow their interesting "Ruido y Memoria" stance with swedish d-beat-influenced hardcore punk. These songs will eventually be featured in the aforementioned split with Víctimas. Just like the previous band, we've exceedingly featured them here in the blog so it isn't quite necessary write more about them in this entry. Finally, if you're in México don't miss out Amenazas' tour along with Armamento Fatal (San Francisco, US) during this month of august. I'll leave you the dates below but you can go to their official Facebook account and get more details. Just click here. Finally, click on the image for getting redirected to their official bandcamp account where you can listen to their already released material (also available here in the blog). Highly recommended. Enjoy! 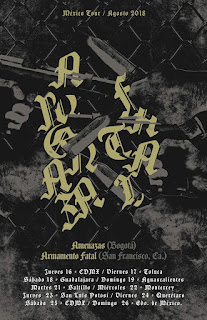 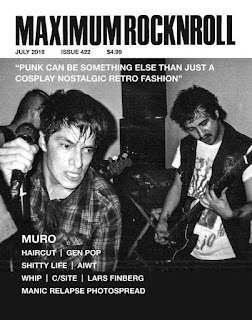 Another "band from the house" (also awarded in our colombian best picks of 2017) spreading the local hardcore punk reality worldwide. They just recently came back from their second european tour where they also played at K-Town Hardcore Fest, one of the biggest hardcore punk festivals in Europe (You can download a compilation featuring all the bands that participated to here). In fact, for this gig they released an exclusive and limited edition split with Zyfilis (A female-fronted swedish hardcore punk band) through Adult Crash (a danish record label). I'm still waiting for my physical edition, since it went out of stock quickly. When I get it, I'll upload it and review it for sure. So, for this compilation they only contributed 1 track (exclusive for this record), which reflects their top-notch style mixing different old schools of hardcore punk through the time (mostly american, scandinavian and japanese) but I think they have matured enough as musicians with a much cleaner and sharp musical execution and instrumentation. And, yes, they were featured in the july issue of Maximum Rock N' Roll (100% real, No fake). What else can you ask for?  Finally, click on the image for getting redirected to their Byllepest Distro (Norway) official bandcamp account where you can listen to their already released material before the aforementioned split (also available here in the blog). Highly recommended. Enjoy! 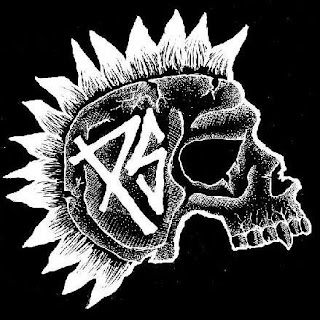 Pútrida Sociedad is a hardcore punk band from Bogotá playing since last year I think. I have no clue about this band and this is the first time I hear about it. So, for this compilation, the band only contributes 2 tracks and these are, apparently, the first official recordings. Regarding the sound, I must admit it is quite fantastic. Indeed, they draw influences from crust and d-beat (with some slight grindcore feel) with short, raw and dissonant songs. I dare to say this is the most "extreme" outfit featured in the compilation. Pretty nice. If you have dig (like me) other colombian hardcore punk compilations such as Colombia A Toda Mierda series or Odio Sus Guerras (already featured here in the blog), you'll surely dig Pútrida Sociedad. I also expect more news coming from this band in the near future. Highly recommended. Enjoy! 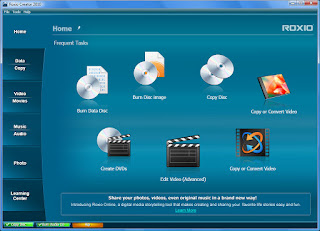 Note: Roxio Creator, I love you

We finish this entry with a brand new female-fronted hardcore punk which only contributed 1 track to this compilation. It features the main vocalist of Demencia Libertaria and both Muro's main guitarist and drummer. And I also think this is their first official release. Regarding the sound, they draw influences from UK82 and d-beat like other featured female-fronted bands such as UZI and Abuso but I think Roxio is a little more faster. I completely liked the aggressiveness displayed by this outfit. It reminded me somewhat of all-time classic female-fronted colombian hardcore punk outfits such as Fertil Miseria, Demencia Libertaria and Polikarpa Y Sus Viciosas but with a more modern approach. Finally, of course, I also expect more news coming from this band in the near future. Highly recommended. Enjoy and until next time. Kisses and hugs!
Posted by La Mort D'Un.e. Moderniste at 7:22 PM