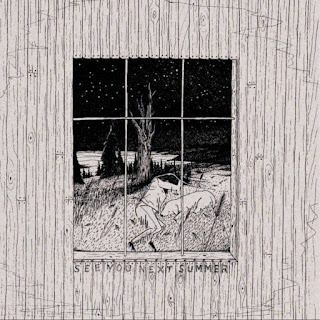 Coucou, les chaton.ne.s! We're back with another short yet wholesome entry. We'll feature this impressive screamo compilation featuring bands from Sweden, Denmark and Norway which was released on digital format TODAY. The beautiful artwork was made by Elina Nilsson, who plays in Mystery Language (an indie pop band from Sweden) and made a guest vocal appearance for No Omega's song Contortion. This is also the first release of See You Next Summer, an one person net label from Malmö, Sweden.

Now, the curator behind this project wanted to feature different scandinavian screamo outfits that have been active in the last decade. Firstly, do not get impressed by the great amount of the included swedish bands due to, since the mid-00s, this is the only country from the region with a huge and prominent scene that has spawned well-known and influential acts such as Suis La Lune and Via Fondo, among others. In fact, the Swedish Skramz Mafia is a hilarious yet precise term circulating on the Internet for describing the whole modern screamo scene in Sweden. Secondly, I was kinda impressed with the addition of bands from Denmark. Indeed, I didn't know that they even had screamo-related outfits. I must admit that the danish hardcore punk scene has hidden jewels that have caught my attention lately since we made the K-Town Hardcore '19 Fest entry (If you want to re-read it, click here). I'll try to feature more bands from that country. Finally, there are only two featured bands from Norway. I haven't heard anything related to norwegian screamo since the days of Kaospilot and JR Ewing (You know, many summers have passed since then ha ha). This is also another country with an almost inexistent screamo scene but I'm glad these kind of outfits are starting to flourish in the wilderness soils of the place. I hope to see more material coming from there in the near future.

Regarding the sound, as we already stated, this is a screamo compilation. You'll find some of the modern trends in the subgenre, such as post-hardcore-influenced acts in the same vein as Touché Amoré (US) (You can think of musical outfits such as Vientre (Colombia) and Joliette (Mexico) for getting and idea), post-rock-influenced acts paying homage to Envy (Japan) and, of course, Suis La Lune (Sweden) and, yes, chaotic emoviolence-driven acts as well, pretty much like In/Humanity and Palatka (US) but with a more modern touch.

Lastly, click on the image above for getting redirected to the official bandcamp account where you can listen to/download this record. Also, you can click each song individually for getting each band's bandcamp and social media links. Please try to support them. Totally worth it. Highly recommended. Enjoy and until next time. Kisses and hugs!
Posted by La Mort D'Un.e. Moderniste at 4:56 PM

Since the beginning, the site doesn't run ads nor carry advertising outside of it. With this, I could get more resources to improve the blog and the podcast and, who knows, make one of my passions a way for a living. So, if you love this humble work, please consider supporting it with a monthly subscription fee and get some extra goodies along the way. I'd be very thankful if you do so.
https://www.patreon.com/lamorthxcpvnx