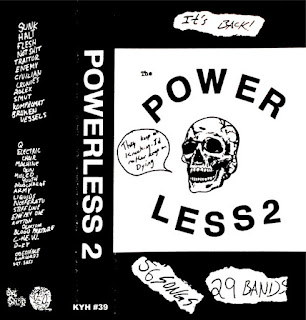 Coucou, les chaton.ne.s! We're finally back after one month, one day of inactivity. I'm deeply sorry but, you know, the (un)real world demands lots of time. LOTS. I also already announced you some of the pending entries I've been working on. Don't worry I'm almost finishing them (your latest review submissions are included as well). I demand you a little bit more patience, please. You definitely won't regret it. Finally, in november and december, I'll make one special mini-post and one much bigger, respectively, for saying goodbye to this fucked up year, one HUGE surprise announcement for celebrating our 5th anniversary (Wow, five years already have passed...) and I'm also preparing our best picks of this year list. I'll change the whole format for making it less massive and exhaustive as previous years. Stay tuned as always, les chaton.ne.s!. With all that written, let's begin.

So, as you may know, I always try to compensate you my (un)justified reckless abandons and I think this impressive record will surely please you. This compilation was co-released early this year (in February if I'm not wrong) by Kill Your Heroes and Rat Salad (both from the U.S.). This is also the second volume of The Powerless comp series, but unlike its predecessor that only featured California-based hardcore punk bands, this one features different ones across the U.S. (albeit most of them are from Austin, TX or Los Angeles, CA).

Regarding the sound, you'll find in here the trend of mixing both old-school american hardcore punk and d-beat styles that many modern bands in the country are currently known for (some of them are exclusively american hardcore-oriented and some others are more european hardcore-oriented, though). But, in general terms, all of them are short, fast and loud like hardcore should always be IMHO. Also, there are only a few exceptions with more garage rock or post-punk influences but these musical groups try to follow on their own way the fast-paced nature of the record. Nice.

Now, the featured tracks were taken from either the demos or the first albums of each one of the participant bands, for example, Q's self-titled EP (2015), Nosferatu's Sounds Of Hardcore EP (2016) and Machine Gun's self-titled EP (2017), for naming a few. There are two exceptions to the rule, however: some tracks from Blood Pressure's Surrounded LP (2018) (one of our best picks of last year) and C.H.E.W.'s Feeding Frenzy LP (2018) are in here.

Lastly, click on the image above for downloading this record. Our anonymous collaborator/trice codenamed Ariel-451 passed the .mp3 files. Wow, such a beast getting great and exclusive material for us. S/he also told me two things: Firstly, the original tape had some untitled tracks from The Cronies, Army and Sass (taken from their respective demos) and didn't know which ones are. And, secondly, that's why s/he had to randomly picked up some tracks meaning they aren't the same as the original tape. I highly recommend this record, some of the best modern american hardcore punk bands nowadays are included herein. Enjoy and until next time. Kisses and hugs!
Posted by La Mort D'Un.e. Moderniste at 5:09 PM

We recently have created a podcast which will be a complement to this written blog. It currently is in spanish but we'll see if we do something in english or even french as well in the near future. Lastly, some of its content might be slight different to the one featured here in the blog. Check it out by yourselves, les chaton.ne.s!
https://co.ivoox.com/es/podcast-podcast-la-mort-d-un-e-moderniste_sq_f11037072_1.html#