On est de retour, les chaton-ne-s! I'm really sorry for my absence but I'm dealing with some personal and academic issues. It's been a mess these last weeks. So, I found a pretty neat way to compensate my reckless abandon: international 80s hardcore punk compilations released by french record label Deflagration Tapes. Hell fuckin' yeah!. I was looking for the fourth volume (dedicated to the 80s french hardcore punk scene)  and I found it on oldschoolmike's blog One Track To Hell (http://onetracktohell.blogspot.com). For my surprise, not only I found the desired tape but I also found all of Deflagration Tapes remastered by Olivier, the record label's owner!. I was shocked. Later, I asked permission to oldschoolmike for publishing them here and he gladly accepted (Thank you so much, dude!). For this entry, I'll give you the links generated by oldschoolmike where you can download all the remastered tapes. Also, this is the original entry where I got the tapes (http://onetracktohell.blogspot.fr/2014/10/deflagration-tapes-compilations.html). You can check out all the other stuff the blog has to offer. Pretty awesome. Finally, the Stone The Flamin' Crows tape won't be reviewed but you can find it in the original entry. Enjoy this post and see you soon (I hope so). Hugs and Kisses!

[UPDATE 09/28/2018: The original download links are down but you can click here for downloading every single record in one file.] 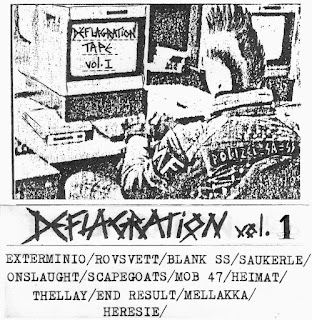 This is the first Deflagration Tape released back in 1984. It includes the following bands: Exterminio (Brazil), Rövsvett, Mob 47 (Sweden), Blank SS, Heimat-Los, Hérésie (France), Saukerle, Scapegoats (Germany), Onslaught (UK), Thellay (Japan; I think they're also The Clay), End Result (Australia) and Mellaka (Finland). Regarding the sound, we have some of the finest european and japanese 80s hardcore punk sound. You'll find both american and british hardcore punk influences, but each band has that special touch that corresponds to its respective local scene. I think the only pure american hardcore punk-influenced band is End Result. Finally, some of you may be asking: Is that Ounslaught, the UK thrash metal outfit? And the answer is, Yes. They are. The featured songs are from a rehearsal tape (recorded back in their early years) and have more hardcore punk influences than in later records. It makes me remember  Concrete Sox or Decadence Within for some reason. Pretty cool stuff. Highly recommended. Enjoy! 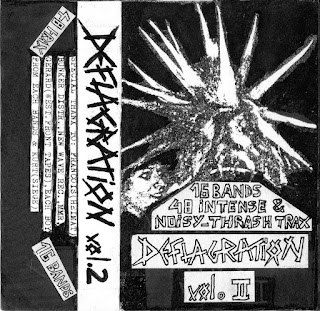 The second volume was released back in 1985. It featured the following 16 bands: Sound of Disaster, Crudity (Sweden), Siege, Verbal Abuse (USA), Stres Da (Slovenia), Vorkriegsphase (Germany), Razor Blades, Flere Døde Pansere (Denmark), SP Caos (Brazil), Eu's Arse, Wretched (Italy), Rapt, Heimat-los (France), M.O.G., Lärm (Netherlands) and IV Reich (Spain). As you may have guessed,  this is my favorite Deflagration tape because it contains some of my all-time favorite bands like Lärm, Siege, Wretched, Rapt and IV Reich. Also, I'm really surprised with the sonic fury unleashed by the danish bands: Flere Døde Pansere is female-fronted with fast and short songs in their native language while Razor Blades sang in english. Both bands share an amazing split EP named Forhadt Ungdom. Go and check it out. Another band that really impressed me was Stres Da. Their 1983 demo is superb with a sound that perfectly blends european and american influences, pretty similar to some swedish hardcore punk bands of the time like Mob 47 or Rövsvett. Another lost jewel for the thrashcore subgenre? Maybe. Speaking of Sweden, Sound of Disaster and Crudity make a fantastic work with their music representing the Mangel style. Finally, the remaining bands are pretty awesome too: lo-fi, fast and relentless hardcore punk the way we do fuckin' love it. Highly recommended. Enjoy! 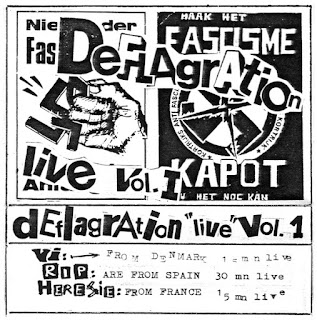 This tape was also released back in 1985 and it's the first (and the only) live tape from the record label. It contains 3 live performances of VI (Denmark), R.I.P. (Spain) and Hérésie (France) I'm not really sure about the respective locations except for R.I.P. because the songs were performed at Lekeito, Basque Country. Some of these songs are included in Lekeitio LP. and their respective studio version are also included in their fantastic No Te Muevas! LP, one of my favorite 80s spanish hardcore punk records. Once again, I'm really impressed with the danish band. Mucho poder! I should make a special with 80s and 90s danish hardcore punk bands, they deserve it. Sure, why not? Finally, Hérésie is a complete mystery for me but their sound is top notch. It reminded me some mexican bands of the time like Solución Mortal or Histeria. Pretty cool. Highly recommended. Enjoy! 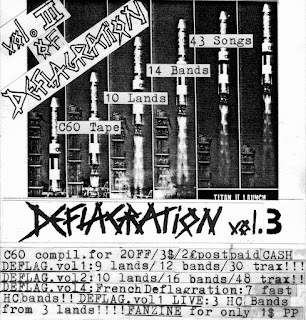 Another amazing tape released back in 1985. It contains the following 14 bands: Underage (Italy), Dezerter (Poland), Kromozom 4, Rapt (France), Scapegoats, Inferno, Squirt, Ceresit 81 (Germany), Unnatural Silence (Canada), Underdogs (Belgium), F.O.A.D. (???), Neon Christ (USA), Bloedbad (Netherlands) and Protesti (Finland). Some of these bands have already been posted in this blog. I have to remark the awesomeness of the german bands because we haven't had the opportunity to explore them. Another post dedicated to them? Probably. Also, we find Dezerter, the best 80s polish hardcore punk band, short, fast and loud. Finally, the remaining bands have their special touch, for example, Neon Christ and Rapt surprise us with their ultrafast hardcore punk and Unnatural Silence are the canadian Crucifix. No kidding. You should check it out. Enjoy! 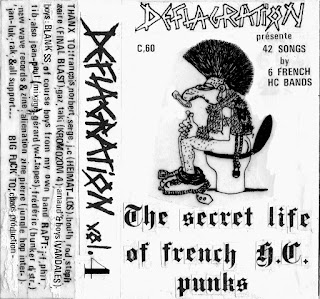 Finally, it's here. Fuck yes! I mentioned you this tape when we reviewed the legendary 80s french hardcore punk Rapsodie en France Vol. I (for refreshing your memory, go and check it out). It was released back in 1985 and features the following 6 bands: Les Vandales, Final Blast, Kromozom 4, Rapt, Blank SS and Heimat-los. As we previously said, this compilation tape contains the same tracklist as Rapsodie...(with some other extra songs) except for Blank SS, that didn't appeared in the original release. Also, Butcher, Gonocoke and Bloody Fuckers are absent in this compilation. We can say that both compilations make the perfect documentation for the french hardcore punk scene in the 80s. Absolutely brilliant. You must download it. Highly recommended. Enjoy! 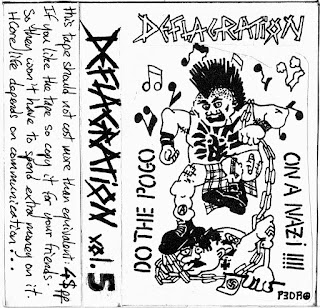 Finally, we conclude this post with an interesting split between Rapt (France) and Herraids (Sweden), released back in 1986. This also was the last volume in the Deflagration tapes series. You must already know Rapt because it was already featured in our blog and also appeared in all the volumes of Deflagration tapes series. In my humble opinion, it's the best 80s french hardcore punk band with an ultrafast hardcore punk reminiscent of bands like Lärm, Heresy and D.R.I., the bands that gave birth to the thrashcore and grindcore subgenres. The featured songs are available in their split with their local friends of Final Blast, including two amazing covers of Blank SS and Lärm. We must dedicate an entry to Rapt. I hope to do it soon. Last but not least, Herraids featured members of local acts like Rövsvett and Raped Teenagers. The cover inlay reads that this band had two demos prior to the release of this split tape. I'm not really sure if the featured songs are the same that were included in these demos. Regarding the sound, compared to other 80's swedish hardcore punk acts, Herraids had a more "american" approach. Thus, it somehow reminded me italian bands like Indigesti and Negazione. Not as frantic as Rapt side but pretty cool stuff though. Highly recommended. Enjoy!
Posted by La Mort D'Un.e. Moderniste at 10:29 PM No comments: 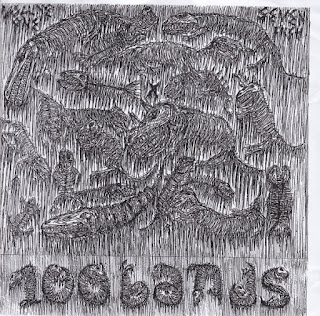 Hola, mis cachorrit@s dind@s. We're back once again with the small but wholesome entries (Oh yes. Give me more honey, sugarbear) Emmm, ok...This time, we'll return with a pretty cool compilation released in 2010 by NHDIYSTREC Records (Lyon, France). Our beloved friend Daniel AKA El Monster highly recommended it. Pille el EP que le había dicho. Brutal ese hp! (Gracias homie!). I know most of you have been missing some grindcore and powerviolence madness and I'll please once again those appetites for musical destruction.

As the name suggests, the compilation includes 100 bands and the record length has less than 20 minutes!!!. Orale güey! Absolutely amazing. It shares the same spirit of Slap-A-Ham Records' Bllleeeeaaaauuurrrggghh!!! compilation series: Short, Fast and Loud songs in the way we do fucking love it. Hell yeah. Among the featured bands, we found all-time classics like Agathocles, Jesus Crost and Total Fucking Destruction. Also, I was surprised because it's included one song of Yacüzzi, an extinct colombian noisegrind project. So many memories...

Finally, click on the image and you'll download the file with the artwork, layouts, contact information and lyrics. Most of the bands are quite a mystery to me, except the forementioned ones, and I was really pleased with the final product. It's really cool to know new bands everyday. You'll find here pure bizarre tupa tupa madness, weird song samplers and a lo-fi production. Pure heavenly ecstasy. Also, each side of the 7" are separated as two .mp3 files because each song lasts less than 30 seconds and it's really difficult to extract each song individually.

I hope you enjoyed this compilation. We'll be back pretty soon with more surprises. Hugs and kisses!.
Posted by La Mort D'Un.e. Moderniste at 9:31 PM 2 comments: